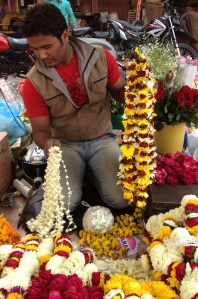 We usually shake hands when we meet, but here in India people join hands to the chest and say “Namastè” to each other meaning “I greet the divinity be in you”.  A traditional indian greeting of respect with spiritual and symbolic meaning.

India is a country to live fully, a country able to offer excitement and emotion, a country that evokes deep impressions.  But it is also a country of great contrasts where modernity, technology collide with extreme poverty, chaos, disorganization and bureaucracy.

This is our 7th trip to India.  We visited regions of the far north, east and west and down to far south.

This itinerary takes us to an intersection between a royal India and a rural India.

South of Delhi open the doors of the magnificent Rajasthan, almost a desert but also architectural gems, fabulous buildings which reflect in the waters of lakes.

We start our circuit from Mandawa in the region of Shekhvati.   Mandawa is a town rich in Havelis which are medieval merchants’ houses beautifully painted.  For this reason, this town has also been named “open art gallery” of Rajasthan because of the many fascinating havelis  that have lavishly painted walls.  Unfortunately most of them need much “face-lift”, but seems that architects concentrate more on the inside paintings and sculptures than on facades. 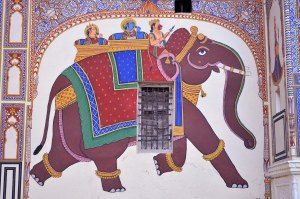 One of the paintings that often appear in the havelis walls illustrate the legend of Dhola and Maru, a local version of Romeo and Juliet but with a happy ending.  It’s the story of a princess Maru and a prince Dhola who, after having overcome many vicissitudes, they can crown their love dream, run away together and……live happily ever after. 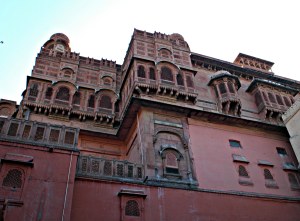 We proceed towards Bikaner, 4 hours drive from Mandawa, in the Thar  desert.  Bikaner is a lively and dusty place with a frontier-town atmosphere. It is dominated by  the magnificent Junagarh Fort, a strong imposing fort protected by mighty walls and considered one of the most beautiful forts in the world.  Bikaner old city is very pleasant,  you will find yourself walking in the middle of a maze of narrow streets animated by motorcycles, cycles and tuctuc, by shops selling all kinds of stuff, but…. watch out the train passing by through the streets of the city and stopping the flood of people!!! 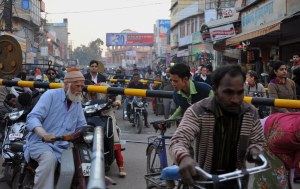 Other main attraction of Bikaner is the Camel Festival.  Every January camel owners from all over Rajasthan gather to this colorful festival dedicated to the “ship of the desert”  The Camel.  Festival opens with a parade of bedecked camels.  Celebrations include camel races, fur cutting design, camel milking, camel acrobatics. Thousands  of spectators  attend the shows which ends late at night with spectacular fireworks. 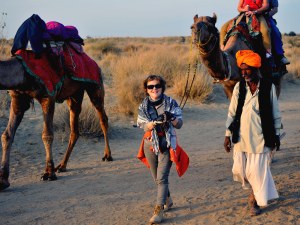 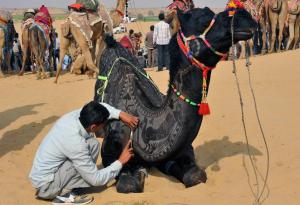 The best Masala tea I had in all my trips in India is the one sipped in  the streets of old Bikaner.  Made at art rule by a street seller, a cup of sweet hot masala tea is the best antidote to warm weather when touring in India. 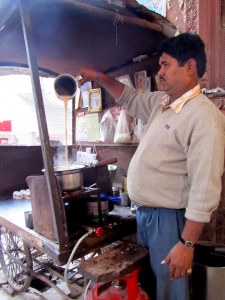 Not far from Bikaner, in Deshnok, there is the temple of Karni Mata, the holy  temple of rats.  There are differences in the legends about the temple, but local people version is that Karni Mata lived around 1500.  She was a mystic,  believed to be an incarnation of Hindu Godness Durga.  When the child of a storyteller died, Karni Mata tried to bring him back to life, but Yama – God of Death – had already claimed him.  Karni Mata decided, from then on, all storytellers would reincarnate as rats so Yama would no longer be able to have their souls.   Spotting a white rat is highly auspicious, but seems that only two or three white rats live in the community, this makes difficult your dream to come true.  You can have however more chances that an holy kaba walks on top of your feet:  this also is a sign of good luck for you.  Karni Mata has her own shrine inside the temple, surrounded by beautiful carved silver sculptures and guarded by silver lions. 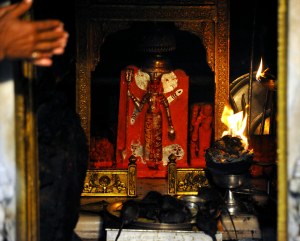 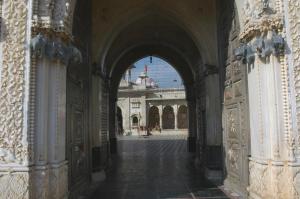 A long drive takes us from Bikaner to Jaisalmer, the “Golden City” located in the Thar desert and close to the border with Pakistan.  Jaisalmer is a magnificent city of historic importance.  Like all other cities of Rajasthan, Jaisalmer too has its glorious past which goes back to the Rajputana period. Its name “Golden City” is due to the color taking its beautiful palaces at sunset kissed by the last ray of sunshine.  Romantic and charming,  in Jaisalmer you can still enjoy the atmosphere and traditions of past centuries of splendor.  Its fort acts as sentinel from its 80 mt of height to the desert that broadens at its feet.  Within its walls you can walk along narrow and characteristic streets that recall ancient medieval atmosphere, as well as visit beautifully carved and decorated jain temples.  And also,  Gadi Sagar Lake, an artificial pond surrounded by temples and shrines.  All this and much more you can find in  the “Golden City” of Jaisalmer. 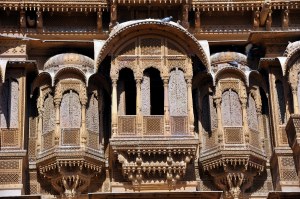 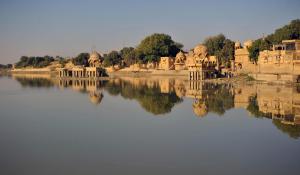 We reach Jodhpur known as “Sun City” because of its bright and sunny weather throughout the year, but also as “Blu City” due to the indigo tinge of the whitewashed houses around the Mehrangarh Fort.  The painting of the houses is most believed to do with the prevailing caste system in India.  In fact Brahmins – the Priestly class – were the first to start coloring their houses blu to signify their domicile and set them apart from the rest of population.  Jodhpur has many beautiful palaces such as Mehrangarh fort, a spectacular hilltop fort situated on a steep hill.  It is one of the largest forts in India enclosed by imposing thick walls.  Inside its territorial boundaries there are several palaces which are famous for their intricate carvings and hidden courtyards all worthwhile visiting.  We could have stopped longer in this enchanting blu city but time is running out and Udaipur is waiting for us.

The “Jodhpur” are elegant horseman trousers generally of pale cream color.  They are wide above the knee and tight at the bottom. It seems that the designer Pratap Singh, soldier and horseman of Jodhpur has designed these trousers for the Golf team of Jodhpur Lancers.  Trousers soon spread and were adopted throughout the world.

Udaipur, the white city of Rajastahn stands on the banks of Lake Pichola, often called “the Venice of the East”.  Overlooking the lake stands the splendid City Palace with balconies and cupolas, it ‘s Rajasthan largest palace and home, even today, to some Royal family members.  The Lake Palace, Jag Niwas, located in the middle of the Lake, is a beautiful example of architectural marvel.  Built as Royal summer residence was then converted into an heritage hotel.  The city is dotted with old havelis  and temples at every turn. 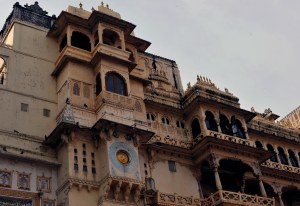 A long drive through chaotic villages full of traffic and dust takes us to Bundi.  A small town surrounded by the Aravalli hills.  Its main tourist attraction is the Taragarh Fort or “Star Fort”.  This is one of the most impressive and, in days gone by, impregnable forts of Rajasthan.  The Bundi Palace, on the hillside adjacent to Taragarh fort is notable for its traditional murales and frescos.  Visible from the fort and palace is the artificial lake where a temple dedicated to Varuna, the Aryan God of water, stands half submerged in the centre.  The reflection of the old city, the fort and palace can be seen in its waters. 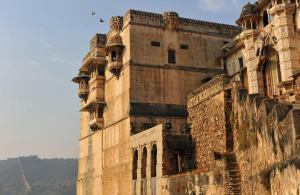 At  any time you may find yourself face to face with a cow roaming freely.  In any place, village or town, emaciated cows, stunted and starved go around in search of food.  Often eat garbage, plastic, newspapers or adverts hanging down the walls of streets.  They leave their droppings on the pavement that, collected with bare hands, are placed in proper sites, then mixed with straw and attached to the walls of houses to dry.  These  “tiles” in the shape of cake are used to start the fire like firewood. 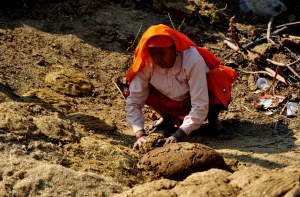 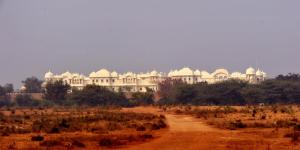 And now we are at the end of our trip in Ranthambhore Park with the only aim to see the tiger.  Ranthambhore  Park, the largest park in northern India is situated at the joining of  Vindhya plateau and Aravalli hills and is bounded by two rivers: Banas and Chambal rivers.  It supports a diverse range of flora and fauna and it is known for its tiger population and being also India Tiger Reserve.  It is named for the historic Ranthambhore fortress which lies within the national park.

It is believed that at the Ranthambhore Fort it happened the first Jauhar (ritual mass suicide immolation) of the Rajput history. Hammir Deva, lord of the Fort, in XVI century went into battle against muslim forces.  Although Hammir managed to defeat them, all women hidden in the fort believed Hammir died in battle.  According to a Rajput habit, they preferred death to dishonor and committed mass suicide.  When Hammir came to know what happened to women he beheaded himself before the image of Shiva in the Fort.

India is a beautiful many-faces country, a country of rich cultures, colorful festivals, old traditions.  It’s a country that surrounds you and involves you in its way of living.  The feelings you have from a trip to India are unique and unrepeatable.  It’s the country of  extreme poverty, resignation accompanied by a total exasperated fatalism, innate religiosity.  A country where children spend the best years of their life surviving in the streets to work or beg, where families live their whole life in shelters made of cardboard along roadsides between piles of garbage, where the caste system still exists, where the tradition of dowry is still active and puts great financial strain on bride’s family. It seems to be also the reason of sex selection favoring the birth of sons over daughters: female foeticide that is aborting a fetus because female. Not to mention the living condition of indian women who live their lives under the shadow of inequality and discrimination.  They are the most disadvantaged people in indian society, though their status can vary significantly according to their social and ethnic backgrounds and also from urban and rural areas. 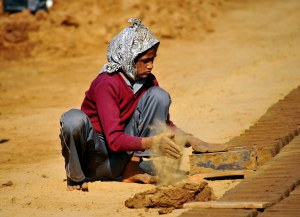 But there is also another India. The country of Information Technology and huge economic growth, the country of magnificent maharaja palaces, of luxury hotels for the very rich only and where to lower castes only entering is still denied.

The India of today is in many facets the same India as centuries ago.